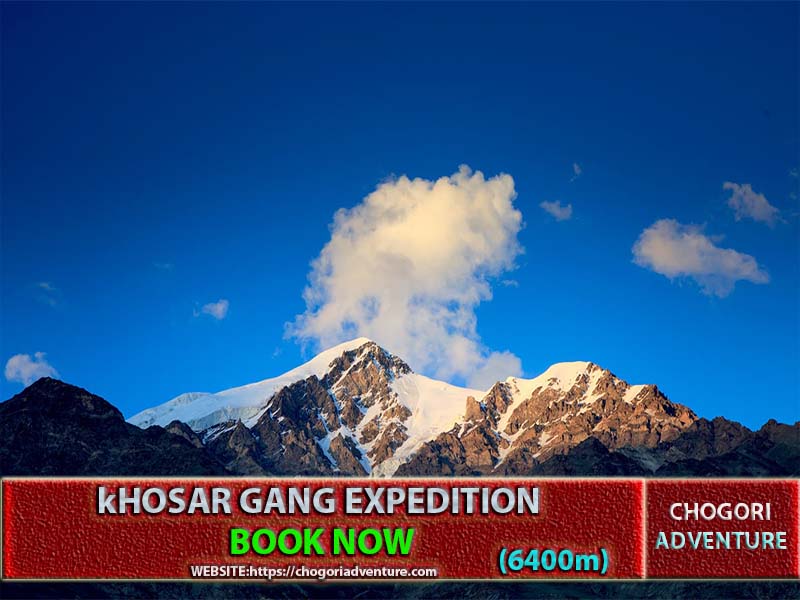 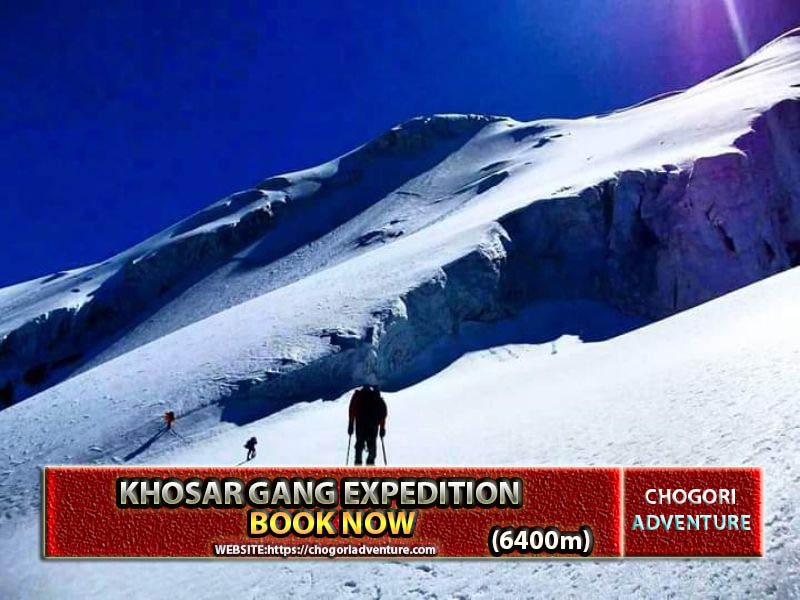 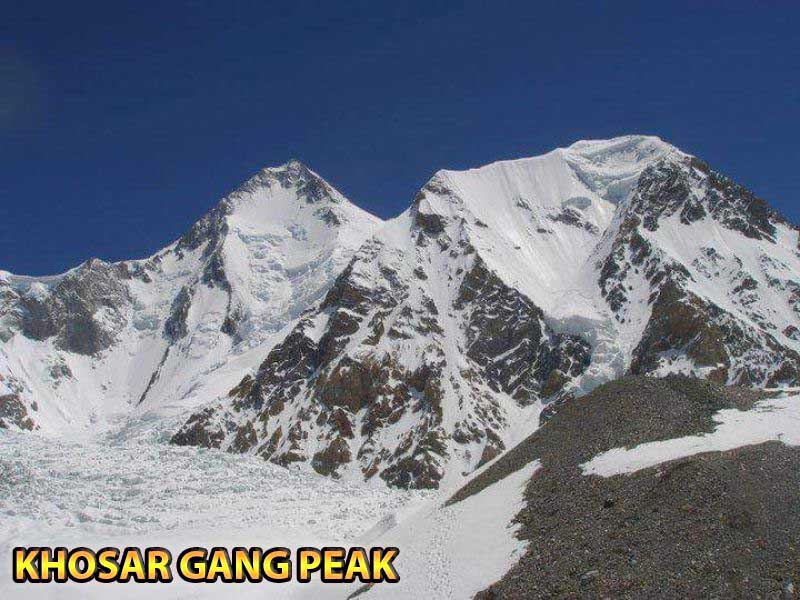 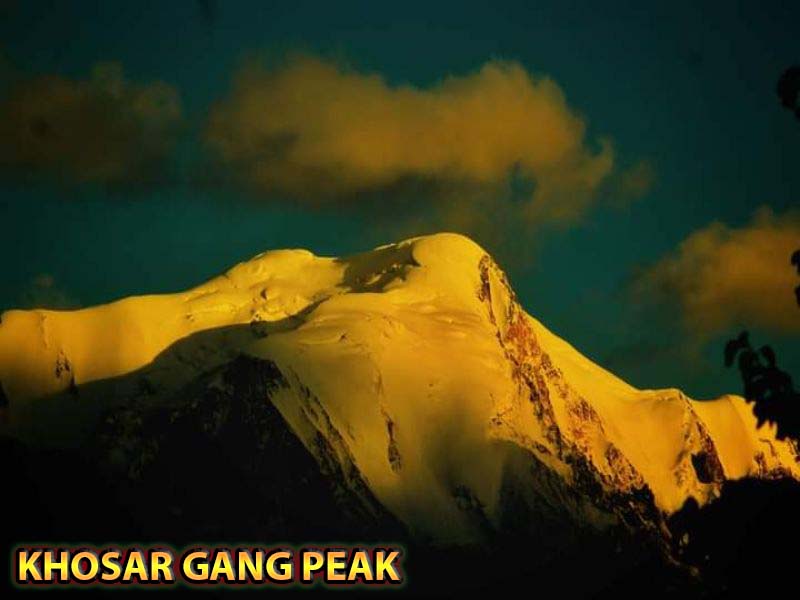 khosar Gang Peak is a 6,000 m situated on the left bank of Braldo river in Sildi / Kashmal Village of Shigar valley 45km from Skardu City. Khosar Gang in Balti language stands for Pumpkin Glacier. Local associate much supernatural and myth with this peak. Khosar Gang is technically less difficult peak to start climbing.

It is icy with little rock on the way to the summit make it ideal for intermediate or beginners in climbing as well as an acclimatization Peak for professional climbers. Khosar Gang is no doubt a brilliant introduction to high-altitude mountaineering.

Khosar Gang Peak is the best training station for climbing enthusiasts all around the world, especially hundreds of local climbers who prefer to start their climbing careers from this peak.

The peak is ideal for those who want to start climbing and aim for 7000m peaks and 8000 m peaks. It provides you with the best technical knowledge and acclimatization before a higher altitude. Unlike many other peaks of Karakoram, Khosar Gang Base Camp is easy to reach, it is just 4 to 5 hours trekking from the Sildi Village.

Khosar Gang Expedition provide the panoramic view of Karakoram mountains and Shigar valley from the summit. you can view Spantik 7027m, Nanga Parbat 8000m, and hundreds of above 5000m peaks around.

We undertake Khosar Gang Expedition from Sildi village shigar, Khosar Gang base camp is also accessible from Yonu and Mango villages of shigar as well. Climbing Khosar Gang Peak does not need extensive climbing and technical skills it is an easy and straightforward expedition. The base camp is about 5-6 hours hike on the steep slopes of the hill from the village. Khosar Gang Base Camp is established at a grassy land in front of the peak.

The are two more camps above base camp; camp 1 and camp 2.  Base Camp is located at an altitude of 3800m, while camp 1 at 4800 and camp 2 at 5200m altitude. The route till camp 2 is mostly rocky or grass with rough patch of rocky patch above camp 1 but up to camp 1 it is mostly grass. The route till camp 1 and between camp 1 and camp 2 is a steeper hike than climbing. Onward from camp 2 it is snow and need some extensive climbing of 5-6 hours to summit. This section is mostly angled snow slope with a vertical wall of snow about 90m which required rope fixing. In sum Khosar gang expedition is a moderate climbing peak in the heart of karakoram with 90-100 m technical section above camp 2.

The first ascent of this peak was made in 1899 by the American Couple Dr. William Hunter Workman and Fanny Bullock Workman. The estimated elevation of peak by them was 21,000ft. At that time this was a world altitude record for women climbers.  Since then there have been many expeditions and the success rate is above 90%. Simone Morro, Denis Urubko, and their team have also tried this peak for acclimatization during their famous Karakoram winter expedition 2010-11. They could not summit Khosar gang peak and just end up below some meters from the summit due to the risk of frostbite to one of the climbing partners Corey.

In recent years it has gained more attention from climbing enthusiasts, across the world, particularly among domestic Pakistani climbers. There are more than 20 expeditions each year and most of them are being undertaken by local climbers. We are the host of Khosar Gang Peak; it is our communal pasture so we are able to provide a better package than anyone else. We offer a full-service Khosar Gang Expedition at a very reasonable cost.

International clients are provided with full board expedition facilities except insurance and rescue with the following cost schedule . (from Islamabad to back to Islamabad)

We organize Khosar Gang expedition on a tailor-made basis for groups and individuals according to their needs. As well we have following fixed departure for 2021, aspirants can join one of the following departures with a fixed price.

Khosar Gang Peak is suitable for those who maintain standard fitness and do normal mountain walks. But must know about climbing equipment’s particularly Ice Axe and Crampons

If you have done any trek in Karakoram, Himalayas, Alp, or Tatras like K2 Base Camp or Gondogoro La Trek, Everest Base Camp, or any other trekking’s equivalent to these treks, Khosar Gang Peak is the best peak to start climbing

Does our Khosar Gang Peak Expedition information excite you to take the next step towards achieving the best climbing experience? get in touch today.  We pride ourselves to be the best in the mountains serving thousands of our clients through our professional training advice, gear lists, logistics, and professional Staff. and much more.  We are always available to your questions.

Early morning Departure to Chilas from Islamabad via the Hazara Motorway and Kakarokram Highway (In Case of Flight: Flight to Skardu from Islamabad)

Drive to Skardu City via Gilgit Skardu Road along Indus River. (In Case of Flight: Rest day or local excursion at Skardu)

Preparation for the expedition

Climbing Days at Base Camp

Day-9 Back to Skardu

Hike back to Sildi village and drive to Skardu

Day-10 Back to Chilas

Back to Chilas or Narran (In Case of Flight: Flight to Islamabad from Skardu)

Drive to Islamabad or Rest in Islamabd (In Case of Flight)

Participants must be in good shape for the Khosar Gang Expedition. If you have climbing experience of any 3500m or 4000m peak anywhere in the world you can find yourself eligible for Khosar Gang Peak. Those who have experience of doing Big trekking’s like (Everest Base Camp Trek, Island peak trek. K2 Base Camp Trek, K2 Gondogoro La Trek or Snow Hiper La trek, Annapurna Base Camp trek) or any other trekking of the same difficulty in Karakoram and Himalaya is Eligible for this Expedition. Khosar Gang Peak is categorized as a trekking peak by many experts rather than a climbing expedition so do not underestimate yourself get ready for the adventure. For further details, leave a message we will let you know in person. 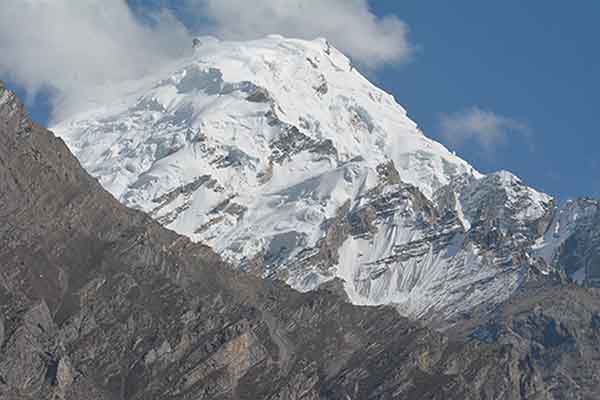 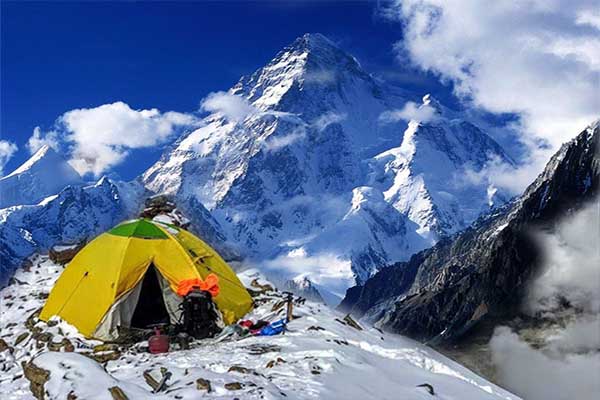 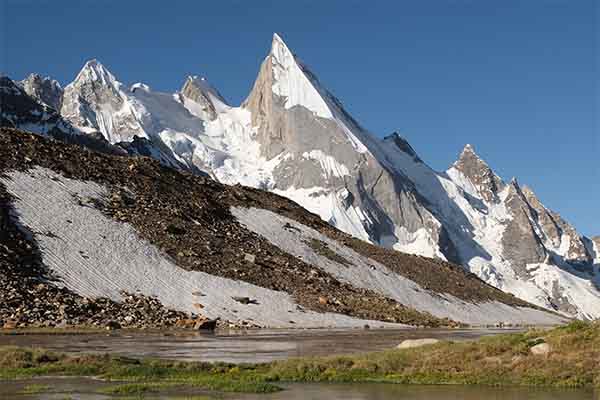 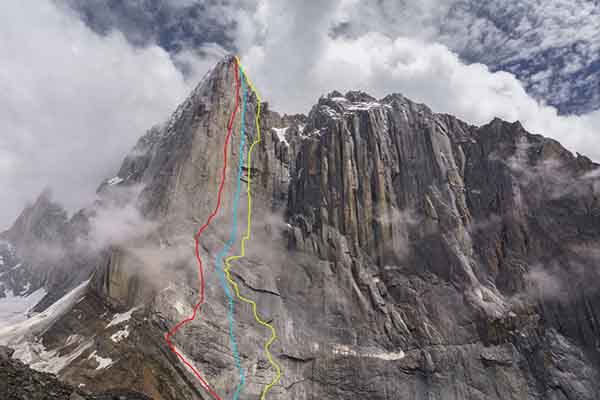 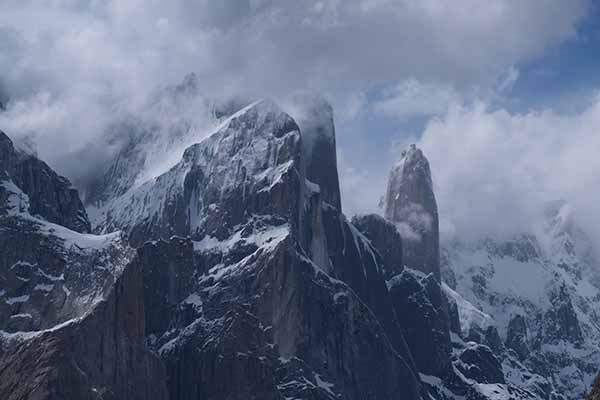 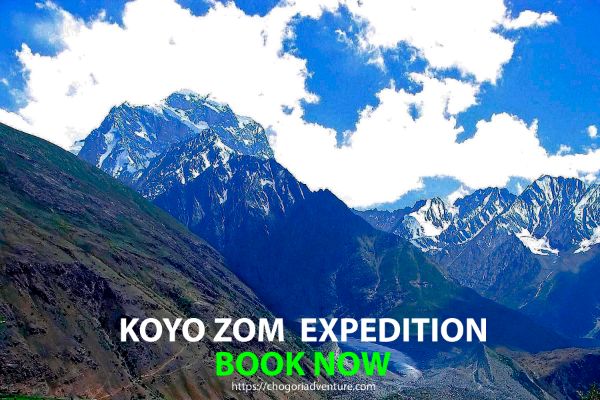